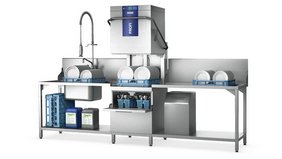 Manufacturer describes innovative new machine as ‘the future of warewashing’. After previews across Europe, Hobart’s category-defying new TWO-LEVEL-WASHER is now available in the UK. The machine makes ground-breaking strides in time, energy, water and space saving while doubling the capacity and productivity of a conventional hood-type, by way of an additional washing chamber.

With space at a premium in modern kitchens, the machine’s two wash chambers offer the ultimate in flexibility. At peak times, for instance, a utensil wash programme can take care of heavily soiled pots, pans and cutlery in the lower compartment, while up to three racks of dishes can be washed on a separate programme in the upper level. The specially designed utensil wash programme also eliminates the requirement for manual pre-treatment of heavily soiled ware in a separate sink, the space for which is often not available in smaller sites.

Crucially, though the machine’s capacity may be double that of a conventional hood-type, the water and detergent usage remains the same.

The Two-Level Washer’s water consumption is monitored constantly via Hobart’s SENSO-ACTIVE RESOURCE MANAGEMENT function. For low amounts of soil, water consumption remains low; when it detects increased levels of soil, it increases water levels, helping to reduce operating costs by 20% when compared to a conventional machine.

The machine’s GENIUS-X² FINE FILTER SYSTEM cleans soiled water in just three steps, reducing detergent consumption by up to 35%. Coarse soil and food waste are collected in the strainer basket, preventing them from reaching the tank.

Tim Bender, Sales Director, Hobart Equipment Division comments: “Some four years in research and development, the Two-Level Washer demonstrates Hobart’s superior innovation prowess in action. The machine is not only the decade’s most important launch, it represents the future of warewashing – the very embodiment of doing more with less.”

To mark the launch, and for a limited time only, Hobart will be offering end users £500 cash back on the purchase price of the new machine (terms and conditions can be found at www.hobartuk.com. The Two-Level Washer is also available on a 12-month or 24-month interest-free finance deal. End user sites are encouraged to speak to the manufacturer or their local Hobart distributor today.